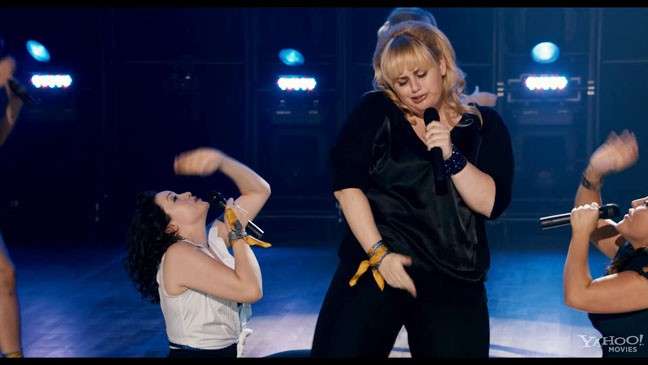 The first thing we need to get out of the way is that competitive a capella singing is not cool. It’s just not.

I’m not saying this in a judgmental way. My extensive collection of Weird Al Yankovic CDs immediately disqualifies me from feeling any smug superiority over the instrument-deficient musical arts.

But if you are going to make a movie about a subject as patently dorky as a capella singing you either have to proudly and daringly embrace its uncoolness, or savage it mercilessly; you can’t shoot for the middle of the road.

Unfortunately, attempting to have it both ways isn’t anywhere close to being the only problem with “Pitch Perfect,” a truly atrocious movie that pretty much fails on all counts.

At fictional Barden University, a capella singing is all the rage and while the school’s all-male group brings home national championships, the all-girl group is reduced to a laughing stock thanks to an unfortunate performance flub by the group’s uptight leader, Aubrey (Anna Camp).

Desperate for members, Aubrey assembles a rag-tag group of misfits that run the stereotypical gambit of “outsiders.” We then meet the literally too-cool-for-school Beca (Anna Kendrick, a likeable and talented actress who deserves much, much better than this).

Beca dreams of moving to L.A. to become a music producer, but instead gets cajoled into attending college by her father. Thanks to plot contrivances, Beca is given an out. If she joins one extra-curricular club for a semester and still wants to leave, her father will pay for her trip to California. Bet you can’t guess what group she joins. “Pitch Perfect” is supposed to be a comedy, which I suppose it is if you like a lot of a capella puns and poorly timed puke jokes. The usually hilarious Rebel Wilson tries her best to be a scene stealer as Fat Amy, but it turns out she’s a lot funnier when she plays understated as opposed to over the top.

The only rays of actual comedic light to shine through are in the form of Elizabeth Banks and John Michael Higgins, who play announcers at the singing competitions (are these things televised?) who riff on the singers like Statler and Waldorf sitting in the balcony.

When Higgins quips about one group “Proving that for some people things don’t get better after high school,” it’s literally the funniest part of the entire movie.

Sandwiched in between all of this is a clunky little romance between Beca and Jesse (Skylar Astin), a good-natured singer from the rival boy group. Their courtship is painful to watch, and as romantic leads go, Astin makes Shia LaBeouf look like Cary Grant.

There’s really nothing redeemable about “Pitch Perfect.” By the time it opts for an all-girl, gross-out scene in a clear aping of “Bridesmaids,” it’s clear they’re throwing the kitchen sink &mdash; garbage disposal and all &mdash; at this sucker and praying something sticks.

I would actually recommend paying to see a real a capella competition before shelling out any money to see this movie. At least there, you have an outside shot at actually being entertained.