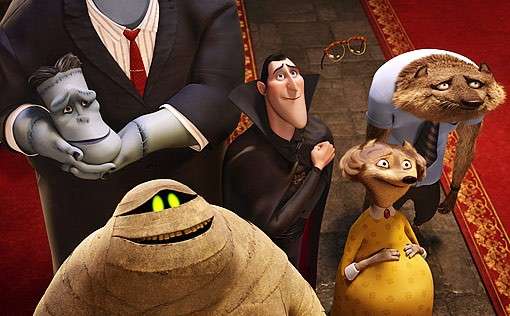 When you think about it, monsters are the ultimate outsiders. It’s a solitary life lurking in the shadows, and when you consider they might not be evil at all, but merely misunderstood, then it’s easy to understand how a monster might want to get away from it all.

A nice relaxing weekend at “Hotel Transylvania” would definitely fit the bill. This middle-of-the-road, mildly-amusing animated feature imagines a world where monsters live in fear of humans and our torch-and-pitchfork-wielding ways.

A veritable gaggle of ghouls seek refuge at a posh, secluded hotel constructed by Dracula (voiced by Adam Sandler), where monsters can relax without fear of any human encounters.

All of the classic monsters show up every year for a shindig to celebrate the birthday of Dracula’s daughter, Mavis (Selena Gomez).

Plot tension arises when Mavis, on the eve of her 118th birthday, finally feels she is old enough to venture beyond the castle walls and into the wider world.

Dracula is more reluctant than most fathers to see his daughter (literally) fly away from the nest because the main reason he built the hotel was to protect Mavis from a world full of humans.

Behold the horror of even more plot complications when a real-life human in the form of back-packing, free-spirit Jonathan (Andy Samberg) stumbles upon the hotel.

To prevent a monster-sized panic, Dracula gives Jonathan a makeover and passes him off as Frankenstein’s world-traveling cousin.

The movie gets lots of mileage from Jonathan livening up the dusty proceedings at the hotel and becoming the life of the party, all to Dracula’s chagrin.

In spite of a screenplay co-written in part by comedic daredevils Peter Baynham (“Borat” and “Bruno”) and Robert Smigel (the man behind Triumph, the Insult Comic Dog, among other things), “Hotel Transylvania” is fairly conventional.

The biggest laughs come from its edgier moments, but even with such rich material and a more-than-competent cast you can’t help but feel that this movie could have been a lot better than just OK. The movie competently delivers on time-tested themes of parents struggling to give up control of their children’s lives and the hazards of prejudging any man or monster.

What we are left with is a completely serviceable piece of family entertainment that adequately holds your attention for an hour and a half. The animation is solid, if not particularly mind-blowing and serves as yet another case of a 3D movie that could just as easily be seen in 2D without feeling like you’re missing anything.

I suppose if I had to praise “Hotel Transylvania” for anything it would be for the supernatural feat of landing precisely between being great and being terrible.

There is nothing scarier for a movie critic than surgical mediocrity. It’s like our wooden stake, silver bullet and flaming torch all rolled into one. With nothing to overly praise or criticize here all that’s left for me to do is tip my hat to “Hotel Transylvania” and wish it well.

“Hotel Transylvania” is rated PG for some rude humor, action and scary images.

‘Rickshaw Girl’ pulls at your heartstrings