“The Young and the Restless” has been the number one daytime soap for 25 years. This could be for a number of reasons, like the fact that there is an African-American family, the Winters, who has been part of the canvas for years (even though sometimes they seem to exist in their own corner of Genoa City where nobody else goes unless Neil needs to talk to them about AA). The other remaining soaps have a few scattered African-American characters who are doomed to dating the only other black in town.

“Y&R” could be number one because of its lush production values. They are not fucking around when it comes to HD. Everyone is lit perfectly and they never sound like they’re rattling around on a soundstage. The cast always looks fantastic, like they’re actually wealthy you know; unlike the women on “Days of Our Lives” who all look like they shop at Caché regardless of their age.

Perhaps one reason “Y&R” has managed to hold on to number one is because there are no homosexuals on the program. That must be it because I certainly can’t think of another reason why there is not even one remotely bi-curious day player on the show. This is patently ridiculous and more than a subtle slap in the face to the queer audiences that help boost their ratings.

Fortunately, there’s an easy way to solve this. Here are my ideas for how to queer up Genoa City and bring in some new stories that don’t revolve around Nick and Sharon getting back together. Again.

First up: Make Fenmore Baldwin gay. This is the easiest track. Fen is 18 and has never had a girlfriend beyond a nebulous crush on Summer Newman. When Summer began cyberbullying Jamie (who really was asking for it), Fen was generally against the idea. But when Fen’s parents, Michael and Lauren, practically adopted Jamie, Fen lost it and got on the cyberbully express his own self. He did this because Jamie was such a nelly old weed that Fen’s self-loathing and internalized homophobia got the better of him. I mean seriously, in order to get Jamie out of the picture Fen stole one of his mother’s objets d’art and planted it on the kid. I don’t want to make generalizations here but straight boys don’t usually try to vanquish their rivals with a purloined Cartier snuffbox.

Later on Fen, a teen pariah turned to who he thought was his only friend in the world, a built-as-hell 20-something bartender named Carmine Basco. It must’ve been Carmine’s collection of tight t-shirts that made Fen feel comfortable enough to confide in the older man. It was Carmine who tried to steer Fen away from the town ne’er-do-wells who met every night behind Hot Topic to smoke salvia.

But when Fen found out that Carmine was more interested in his mother, Lauren, he hit the hard stuff (probably Oxy because kids these days have no imagination). Fen ended up gunning Carmine down in an alley, allegedly because of all the horrible things Carmine had done to his family. What Fen didn’t mention in his statement to the District Attorney was how much the sting of Carmine’s rejection figured into the killing. (This all ended up being a moot point because Carmine wasn’t really dead.)

All of this is stuff that has actually happened on the show. Fen is practically gay already. All the writers have to do is put the words in his mouth and proceed as usual. Fen could be an entirely new type of gay character: The one who comes out to be met with zero scandal or intolerance. Regular viewers of the show can’t tell me that Lauren wouldn’t be thrilled to learn that her son was gay. The greatest source of friction between them would be that Fen had no desire to shop with her.

Another way to gay up the GC is to have Chelsea fall for a woman. I’m sad that Chloe is leaving the canvas because Melissa Claire Egan and Elizabeth Hendrickson have chemistry in spades. I kept hoping that Chelsea would ditch Adam once she learned the truth about his killing Delia. She’d be heartbroken, of course, and find comfort in the arms of her best friend, Chloe. Those two could raise baby Connor together where he would be far better off anyway. The way Adam carried him around and called him Peanut was actually really terrifying.

This story could still work even though Chloe is soon to be out of the picture. A wealthy and powerful woman, let’s call her Elise, comes to town and hires Chelsea to make her some bespoke sexy pants suits. The women grow closer during all the design meetings and fittings and stuff. Chelsea likes the fact that Elise knows nothing about Adam or about her con-artist past. Slowly Chelsea realizes how much she looks forward to her visits with Elise and begins to question her feelings. This leads to a lot of dramatic torment, guilt over her feelings toward a woman as well as the feeling that she’s somehow betraying Adam’s memory.

By the time Adam comes back from the dead (hopefully played by Roger Howarth, Franco on GH, ex-Todd on OLTL) Chelsea will have already admitted her feelings to Elise and embarked upon a relationship with her. That particular storyline is nothing new, but having Chelsea realize these feelings and deal with them is a fresh spin on things. And it’s not like Chelsea would be all, “I’m a total lesbo these days!” Her being bisexual would open up a whole new world of possibilities, namely different kinds of relationships which are what soaps are all about.

Of course, Elise will have a shady secret of her own, like she’s somehow involved with Bonaventure and looking to take down both Jack and Victor. Elise’s ultimate goal is to rule Genoa City with Chelsea by her side. Katherine Chancellor is gone (long live Katherine Chancellor) so it’s high time there was a new Head Bitch In Charge, one who is dressed to kill in Chelsea Lawson’s designs.

The final way to bring gays to Genoa City is to actually bring back the gays who once lived in Genoa City. I’m talking about Phillip Chancellor III and Rafe Torres.

Rafe Torres needs to come back because he’s fine as hell and into some shady shit. Remember when he helped broker Billy’s black-market purchase of baby Lucy? Or how about the time he had sex with Adam even though he was Adam’s lawyer? Then he fell for the guy, even though Adam only slipped him the bone because he was trying to distract Rafe from the fact that he was gaslighting Ashley. (Funny how that little tryst was expunged from Adam’s Big List of Offenses.)

There’s no reason for Rafe to be on the show full-time, but it would be nice to have a sexy, morally ambiguous ex-lawyer in town. I say ex-lawyer because I’m pretty sure black market baby-brokering is enough to get a man disbarred. But then again, Michael is a convicted felon and he still managed to become the District Attorney, so I guess anything is possible.

This brings us to Phillip Chancellor III. As the love child of Phillip Chancellor II and Jill Foster, PCIII’s birth was, to put it lightly, a big damn deal. The feud between PCII’s wife Katherine and Jill that resulted from that affair drove the series up until Kay’s death last year, and we’re still seeing it play out on screen today.

The last time we saw PCIII he came back from the dead to tell everyone that he was a) somehow involved with Australian cattle rustlers, and b) gay. It was a weird way to shoehorn a legacy character into what was ultimately a story about the stultifying Cane. Then he left town, briefly popping up again at his little brother Billy’s wedding where he sat beside Rafe, the only other gay in the village, and even then they didn’t speak to one another.

The whole time I kept wondering why they bothered to bring him back at all. Some kind of rating stunt is my only conclusion. Thom Beirdz, the actor who played PCIII back in the 80s, resumed his role to a bizarre effect. The combination of dodgy plastic surgery and stilted line delivery did very little to sell the notion that PCIII was actually alive after all these years.

Keeping Phillip Chancellor III off-screen is a huge missed opportunity. The show needs to cast Tuc Watkins in the role of PCIII and give him a place on the canvas. His name is Chancellor and it would be amazing to watch him fight Victor over control of the former Chancellor Industries. He could go toe-to-toe with Cane in this arena as well, which would hopefully result in Cane getting all his teeth kicked in and having to flee GC in shame taking his boring bitch of a wife and his obnoxious kids with him.

How amazing would it be for PCIII to call his mother Jill out on all the bullshit she’s put him through in his lifetime? Who amongst you long-time viewers want to see PCIII commiserating with Billy over their mother shunting them both off to boarding school so she could concentrate on her gold-digging? I know I sure as fuck do, especially every time I fast forward through scenes involving Tyler the Chocolate Rock and Kid Kop Kourtney.

Gone are the days of advertisers pulling their spots over the threat of two boys holding hands. Will and Sonny on “Days of Our Lives” not only can’t keep their hands off each other’s freshly waxed chests, they just got married to the delight of both their families. On “General Hospital” Lucas and Brad met sleazy at the bar, bonded over their respective crime lord fathers, and hopped into bed together that very night. And guess what? There were zero consequences unless you count the ones that occurred when Felix found out what happened. Will he and Brad ever get a chance at love? Tune in tomorrow to find out.

In a genre that despite recent increases in ratings is still struggling to gain viewers, it’s time for “The Young and the Restless” to join the rest of popular culture.

You can email Erin Lady Byrne (elbyrne@gmail.com) or find her on Twitter @ErinLadyByrne where she is currently rereading “The Catch Trap.” 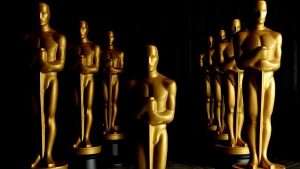