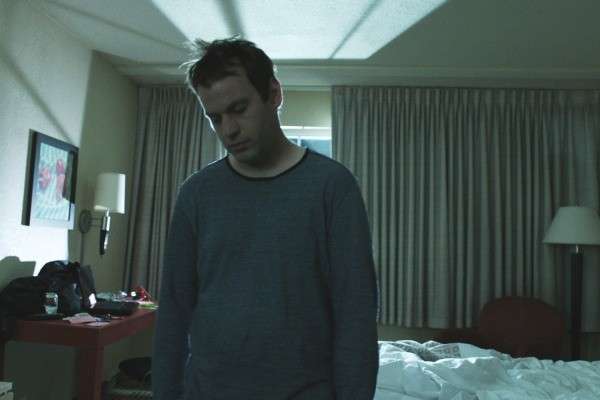 Comedian Mike Birbiglia is an intense sleepwalker. So much so that one time while fast asleep in a hotel, he leapt through a closed window on the second floor, got up and kept running.

The result is “Sleepwalk With Me,” a delightfully funny and heartfelt little movie about the struggles of stand-up comedy, relationships and nocturnal wandering.

In a semi-autobiographic take on his own life, Birbiglia plays Matt Pandamiglio, a 30-something bartender who lives in a state of arrested development.

In spite of all of this, Matt is comfortable with his personal stasis and it’s only when things begin to move that the trouble begins.

Matt’s stand-up career begins to gain some traction, albeit with the humblest of gigs strewn all over New England. Add to that external pressures from friends and family that begin to push Matt and Abby towards marriage. This is when the sleepwalking starts.

It begins innocently enough with Abby awaking to find Matt kicking a hamper and telling her there is a jackal in the room. Matt avoids going to see a sleep therapist, even as his sleepwalking places him in increasingly dangerous situations.

Still he soldiers on with blinders firmly attached, and in spite of Abby’s best efforts, the couple grows further and further apart. Matt continues to string Abby along even as his act becomes increasingly successful thanks primarily to his hilariously honest jokes about his disintegrating relationship.

Birbiglia has a very dry, observational sense of humor and the movie reflects this tone, which makes sense because Birbiglia’s fingerprints are all over this thing. In addition to starring, Birbiglia co-directed “Sleepwalk With Me” with Seth Barrish and co-wrote the script with Barrish, his brother, Joe Birbiglia, and “This American Life” host Ira Glass.

The movie also adopts a good comedian’s sense of when to get off the stage, with the running time coming in at a light and punchy 80 minutes.

This is unquestionably the funniest movie you’ll ever see about a doomed relationship coupled with a life-threatening sleep-disorder. Birbiglia is likeable and does a decent job even though he’s essentially playing himself.

Ambrose is the light and heart of the movie and does most of the dramatic heavy lifting, which can often be a thankless task in a comedy, even a sensitive and thoughtful one like this one.

What “Sleepwalk With Me” does really well is show how people can get stuck in relationships when “love” turns into “like” and neither person is brave enough to let the other go.

That’s heavy stuff for a comedy, but sometimes you need a spoonful of sugar to help the medicine go down.

“Sleepwalk With Me” is unrated. It features adult language and adult situations.

‘Rickshaw Girl’ pulls at your heartstrings