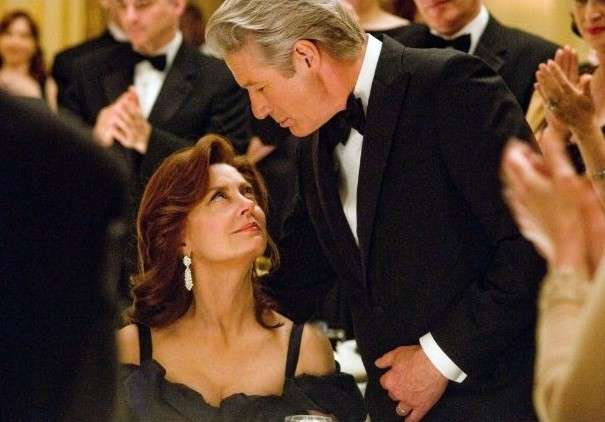 Ar-bi-trage &mdash; noun 1: the nearly simultaneous purchase and sale of securities or foreign exchange in different markets in order to profit from price discrepancies 2: the purchase of the stock of a takeover target especially with a view to selling it profitably to the raider. “The film ‘Arbitrage’ features the best performance of Richard Gere’s career.”

So maybe Noah Webster would frown on my poor usage of the defined word, it still doesn’t make the sentence any less true.

At any rate, I felt it was important to deal with this tricky movie title up front. Not only is it a word rarely used outside of the world of high finance, but attempting to correctly pronounce it would likely lead to your failing a field sobriety test.

Unnecessarily murky title aside, “Arbitrage” is a nifty little financial thriller that showcases Gere employing all the tricks of the trade he has acquired over the course of his nearly 40-year career.

In spite of his longevity, Gere has never really been regarded as a powerhouse of an actor. His classic good-looks and his reluctance to venture beyond playing “pleasant” characters made him a dependable box-office draw, but easily dismissible as a serious actor.

As corporate billionaire Robert Miller, Gere proves that he not only has the talent to carry this morally ambiguous film, but to also dig deep and find a lot of heart and nuance in his indefensible character.

Robert is the patriarch of a powerful trading empire and on the surface appears to have the world on a string. He balances his wife (Susan Sarandon) and his mistress (Laetitia Casta), employs his competent daughter (Brit Marling) as the company’s CFO and his idiot son (Austin Lysy) as a meaningless VP.

When we meet Robert, he is desperately trying to sell his company, claiming the sale is being made so he can spend more time with the grand kids. In actuality, the sale is an attempt to cover up massive amounts of fraud. Then things really begin to spiral out of control when an accident places Robert at the center of a criminal investigation.

There are long stretches where “Arbitrage” feels like a forgettable episode of “Law &amp; Order.” The only thing missing in these scenes of defense lawyers, judges and district attorneys is the occasional “chung-chung” sound effect.

The movie feels dull and lifeless in these parts, even with a great turn by Tim Roth (note to Hollywood, more Tim Roth, please) as the dogged Detective Michael Bryer, who feels as if he were airlifted in from another movie.

But “Arbitrage” crackles back to life when Gere is on screen racing around New York City frantically trying to keep his house of cards from collapsing down around him.

There are several reasons why Gere is fantastic in this role and the first is simply Gere doing what he does best. He takes Robert, a slimy, corporate villain and makes him likeable and charming.

He even makes you root for the lousy SOB as he sells his repeated claims that he is simply trying to protect his family and his employees.

But there are times when Robert’s fa&ccedil;ade cracks and it is in these moments that it becomes clear that this is Gere’s career-defining performance. He lets Robert’s true colors shine through in these tiny outbursts that amount to little more than temper tantrums.

Gere paints a portrait of a character that is simultaneously shrewd and selfish, resourceful and spoiled, and the whole time entirely believable.

It is a little too early to handicap Gere’s chances to snag an Academy Award nomination, but if the competition is thin, don’t be too surprised to see him walking the red carpet on Oscar night. His performance is just that good.

“Arbitrage” is rated R for language, brief violent images and drug use.

‘Lightyear’ goes to infinity and beyond

Return to the Danger Zone with ‘Top Gun: Maverick’