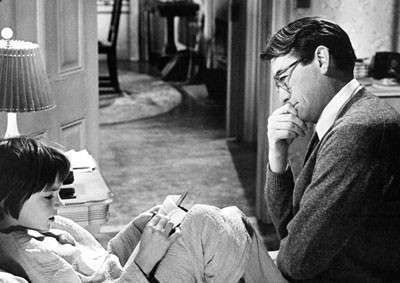 Since I became a dad, I’ve earned a greater appreciation for Father’s Day, and not just because it meant there was another holiday where I got presents (which, I’m not going to lie, is a perk).

It now gives me pause to think about what it truly means to be a parent and the incalculable value of passing on nuggets of wisdom to the next generation, like “Pull my finger.”

Being a movie critic I often look to film for paternal inspiration and find it to be a little harder to come by than you would think.

Television is the true medium of memorable dads (there was literally a show called “Father Knows Best”), but there are still a few bright, shining examples of cinematic fatherhood and I would like to present my personal list of top ten movie dads. These men (and a fish) have set the bar that all we fathers should aspire to.

10. Anakin Skywalker (James Earl Jones/Sebastian Shaw: “Return of the Jedi”) &mdash; OK, so as Darth Vader he may have tried to turn his son to the Dark Side after unceremoniously lightsabering off the kid’s hand. But Anakin really turned it around at the end by chucking the Emperor down a bottomless air-shaft at the cost of his own life, thus saving Luke and the Rebellion. Maybe he’s not the best dad in the universe, but he gets an “A” for effort.

9. Capt. Von Trapp (Christopher Plummer: “The Sound of Music”) &mdash; Sure he takes month-long vacations and orders his seven children around with a whistle blast, but stick a guitar in his hands and ask him to sing about edelweiss and he softens right up. He also boasts top-notch Nazi evasion skills. Bravo, captain, bravo.

8. Jack Butler (Michael Keaton: “Mr. Mom”) &mdash; In 1983 a man staying home with his children and spending his days doing household chores while his wife went off to work was so unheard of it was the subject of a high-concept comedy. Today I call it an average Tuesday. Jack was still a pioneer for we stay-at-home dads and his battles with the vacuum cleaner should be held up there with the likes of Ali/Frazier.

7. Henry Jones Sr. (Sean Connery: “Indiana Jones and the Last Crusade”) &mdash; Turns out the only person who could rattle Indiana Jones was his father, lovingly referred to as Attila the Professor. Like Capt. Von Trapp, Henry did his best parenting with Nazis present and patched up a rocky relationship with “Junior” while searching for the Holy Grail. He also proves that no one can take you down a few pegs like Dad. “We named the dog Indiana.”

6. Stanley/George Banks (Spencer Tracy and Steve Martin: “Father of the Bride”) &mdash; Both the 1950 and 1992 iterations of Mr. Banks stressed and strained at the prospect of having to walk his little girl down the aisle. While Tracy’s portrayal was warmer and a little more stoic, I find Martin’s manic and heartfelt take on George to be more relatable. And let’s face it; nobody can have a breakdown quite like Steve Martin.

5. Bryan Mills (Liam Neeson: “Taken”) &mdash; Now this is a father you do not want to screw with. A retired CIA agent whose daughter gets kidnapped, Mills blasts his way through Europe to get her back. His “I have a particular set of skills” speech he gives the kidnappers over the phone is one of the greatest line deliveries in motion picture history. Definitely not someone you would want to cut in front of in line at the DMV.

4. Don Vito Corleone (Marlon Brando: “The Godfather”) &mdash; Maybe he ran a ruthless crime syndicate and wasn’t particularly kind to horses, but the guy cared about his family. He even tried to keep his best and brightest son, Michael, out of the family business; too bad his other sons wound up being either hot-headed or Fredo. Even still, fewer cinematic fathers have cast as large a shadow (both figuratively and literally) as Don Corleone.

3. Marlin (Albert Brooks: “Finding Nemo”) &mdash; The only non-human to make the list, this nervous little clownfish had to swim halfway around the world to rescue his son who was plucked from the ocean and taken to live in an aquarium. Think of Marlin as a kinder, gentler version of Bryan Mills. At any rate, the lesson he learns about allowing your children to venture out into the big, bad world is a hard one no matter what species you are.

2. Clark Griswold (Chevy Chase: “Vacation”) &mdash; Perhaps no one has defined modern fatherhood as clearly as Clark Griswold. Here is a man who has overcome countless trials, tragedies and humiliations (most of his own doing) all while questing for family fun everywhere from exotic locations like Europe and Wally World to home for the holidays. No one has handled this much adversity with his grace, determination and epic psychotic meltdowns. “Where’s the Tylenol?!!”

1. Atticus Finch (Gregory Peck: “To Kill a Mockingbird”) &mdash; If Clark Griswold reflects who we are at our worst moments, Atticus Finch is who we hope to be at our best. A small-town lawyer and widower with two young children, Atticus agrees to defend a black man, in the segregated South, who has been wrongfully accused of rape. His strength of conviction and shepherding of his children into the dark realities of the world around them is as admirable as it is difficult. He is the gold standard of fatherhood on film.