Pearl Jam had been the last major band remaining on my concert bucket list. A combination of bad timing, lack of resources and cluelessness over the past 20 years had left me on the outside looking in.

This grievous oversight in my concert-going record was rectified Friday night at the Scottrade Center in St. Louis, and holy smokes was it worth the wait.

Said wait turned out to be about 30 minutes longer than I had expected, but no one seemed to mind much with Game 1 of the NLDS being piped into the two huge screens positioned on either side of the stage and the hometown Cardinals in the middle of an improbable rally against the Dodgers.

I like to think that this was good form on the part of the band (massive sports fans in their own right) to put the crowd in an even better mood before the start of the show.

Intentional or not, the move worked and when the inning was over out strode Jeff Ament, Stone Gossard, Mike McCready, Matt Cameron and of course Eddie Vedder to take their places on the stage.

What unspooled over the next three hours (!) was a breathless, highly-entertaining performance that spanned 34 songs from their past 20-year reign as America’s most popular rock band.

The first thing that struck me about Pearl Jam was how tight they sounded. I expected a more loosey-goosey, punkish vibe from these rebellious kings of the grunge era; but this was a showcase of musical precision to the point that roadies were passing out guitars for the next song before the last song was even finished.

The band sounded simply fantastic, a framework of stability that allowed the volatile Vedder the freedom to do his thing.

Let’s talk about Eddie Vedder for a moment, shall we? Not only does the guy have one of the most iconic voices in the history of rock whose songwriting style has drawn comparison to everyone from Jim Morrison to Bono, but he also happens to be a blast to watch.

One minute he’ll soulfully be booming out the lyrics to a song like “Rearviewmirror” or “Even Flow,” then the next he’ll be clowning with Gossard or McCready, then the next he’ll take a swig from a bottle of wine then spew it into the air like a human geyser and then finally he’ll grab the mic to speak to the fans with heartfelt gratitude and humility. And all of this goes on for an entire three hours.

The set list was a textbook mixture of chart-toppers like “Better Man,” “Daughter,” “Alive” and “Jeremy” (which Vedder dedicated to former St. Louis Blues star Brett Hull), interspersed with smaller hits like “Why Go,” “Do the Evolution” and “Once” and deep cuts like “Pilate,” “Thin Air,” and “Low Light.” Then for the superfans, there were a couple of really, really deep cuts, namely “Chloe Dancer” and “Crown of Thorns” from Gossard and Ament’s old band Mother Love Bone.

They even threw in a couple of amazing covers as Vedder opened the first encore with a solo, acoustic version of John Lennon’s “Imagine” and then Pearl Jam closed out the evening with a rousing cover of “Baba O’Riley” by The Who. Vedder, an unapologetic Cubs fan, spotted former Cubs pitcher Kerry Wood in the audience and brought him up onstage during the finale to awkwardly play tambourine.

More than anything the concert was a love-fest between Pearl Jam and their fans. You’ll be hard-pressed to find a more engaged crowd at any show as the collection of (primarily) middle-aged white dudes sang and fist-pumped along with song after song after song.

The band more than reciprocated as they took requests and singled out fans who had submitted their joys and concerns, including a woman who held up a sign indicating this to be her 100th show to which Vedder attempted to share a drink from his wine bottle, only to be foiled by about 20 feet of railing.

They even turned around to sing “Last Kiss” (a cover of a 1961 teen tragedy song that ironically wound up being Pearl Jam’s highest-charting single) to the fans seated, rather, unfortunately, behind the stage.

The show was nothing short of a tour de force from a band that by all accounts should be past its prime in its check-cashing phase. Pearl Jam has not slowed down and after a single show, it is clear why they have some of the most passionate fans of any act touring today. It took me more than two decades to get to my first Pearl Jam show, I have a feeling it will be nowhere near that long before my next one. 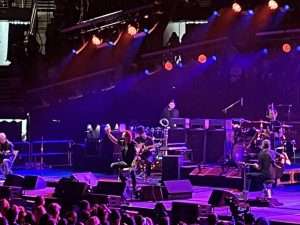