Pearl Jam is a band with one of the most passionate and dedicated fan bases around. Over the course of the band’s 30-year lifespan, that affection has only grown.

The band is fully aware of what great fans they have and use their live shows to express that appreciation.

This mutual lovefest was on full display at the band’s most recent stop at the Enterprise Center in St. Louis on Sept. 18.

I have always considered myself a fan of Pearl Jam, although I fall more in the “Own the Greatest Hits and a couple of other albums” casual-fan range.

This concert was tailored more for the “I celebrate the entire catalogue” fan. So while I didn’t get hear every song I wanted to hear, that was totally made up for by the fact that I was getting to see a band entering its third decade excited and energized by performing the songs they wanted to play in front of a crowd ecstatically singing along to every word.

Plus, frontman Eddie Vedder has such an iconic, once-in-a-generation voice that he could get up there and sing Christmas carols and the show would still be worth the price of admission.

Vedder was in fine form as the band did a bit of a head-fake at the beginning of the show, performing the first three songs seated in a mellow, acoustic vibe.

But just as you thought this might be a new look for a bunch of dudes well into their 50s, the band got back to their grunge roots with the volume cranked, Vedder running around the stage swinging the microphone like a lethal weapon and guitarist Mike McCready grinding against the amplifiers while shredding guitar solos.

The level of gratitude expressed by the band for the fans was more than just lip service as McCready flung fistfuls of guitar picks into the crowd like confetti and Vedder whipped tambourines through the air like he was trying to score under par at Frisbee golf.

There was even (maybe? possibly?) an unplanned addition as at the end of the encore after Pearl Jam’s signature hit “Alive” and the crowd roaring at a fever pitch, the band huddled and whipped out a rendition of the universally beloved “Yellow Ledbetter” before calling it a night.

From the looks of everyone involved in the arena, Pearl Jam shows no sign of slowing down anytime soon and the love affair between the band and its fans is as steamy as ever. 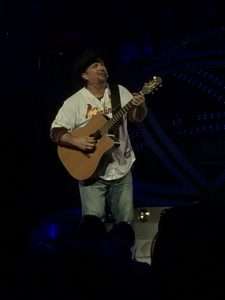