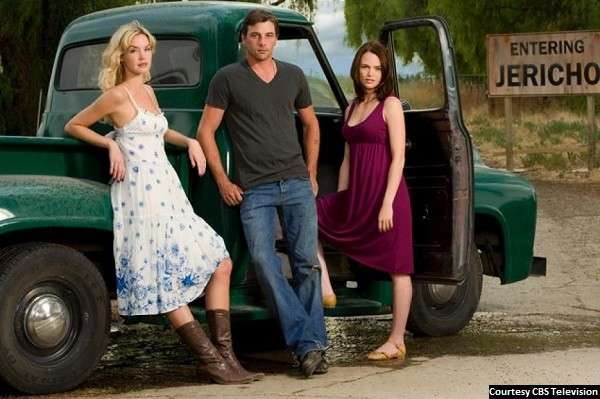 There are many advantages to small-town living: Low crime, a strong sense of community, and the ability to weather a nuclear holocaust. It is the latter if not least likely, the reason that is the foundation of the premise of the new CBS drama “Jericho.”

“Jericho” debuted last fall and as the first season winds down it has developed into one of the most engrossing and addictive hours on television. The show takes place in the remote fictional town of Jericho, Kans., and for those of you who have driven through western Kansas, you know they couldn’t have picked a more perfect location for an isolated community, as the only better options would have been Siberia or the moon.

The show began with the United States being decimated by a coordinated nuclear attack that wiped out a majority of the major cities in the country. With Denver destroyed to the west and Lawrence to the east (as to why Lawrence was seen as a better target than Kansas City, your guess is as good as mine, unless some Mizzou grads were behind the whole thing), the townsfolk of Jericho quickly come to realize that they’re on their own.

What’s fascinating about the show is that we know just as much about the attacks and what is going on in the outside world as the people of Jericho, which isn’t much, but it manages to keep the show grounded. It also helps that the show stays away from more common and fantastical post-apocalyptic themes, such as having to repopulate the earth or running from damn, dirty apes.

Instead, they face what you would expect to be more realistic problems such as: Where do we get food? How do we make electricity? Where do we get medicine? How do we protect ourselves? Protection is a big issue in Jericho as outside the city limits is a pretty dangerous place. It took about a month and a half for most of the rest of the world to go all Mad Max, which I figure is about right.

One time in college some friends and I waited in line outside of a Best Buy all night to buy a Playstation 2. Supplies were limited and most of the people in line started to get weird and twitchy to the point I assumed a fight was going to break out. And that was over a stupid video game; imagine if we were in line for something important, like food. Our civilized society is a little more fragile than we would like to think and “Jericho” does an excellent job of showing how hard it is to keep it together.

While the premise and the writing are excellent, the cast is solid in its own right. Our hero is Jake Green, played by Skeet Ulrich, who must have been found hiding out in a “We Love the ’90s” episode. Jake is the black sheep of the prominent Green family, which only happened to just be passing through town when the bombs went off. Skeet does a fine job of running around, shooting stuff, and punching people, adhering mostly to the Jack Bauer school of acting.

The dramatic heavy lifting falls to Gerald McRaney as Jake’s dad and former mayor of Jericho, Johnston Green. McRaney, who you most likely remember as “Major Dad” or the mustachioed half of “Simon &amp; Simon” is fresh off the role of his career as the sinister George Hearst on HBO’s “Deadwood.” He carries over the gravitas and the show is always a little better when he is on screen and even after being voted out as mayor he is still the de facto leader of the town.

The other pivotal character on the show is the mysterious Robert Hawkins, played by Lennie James. Hawkins and his family showed up in Jericho just before the bombs went off and over the course of the season, it has been revealed that he is a CIA operative who infiltrated the group of terrorists behind the attacks but failed to stop them and now he and his family are on the run from those responsible for the attacks. Hawkins is the link to the grand mystery of the show, which is who is behind the bombs.

At least I think that’s what’s going on. “Jericho” does an excellent job of not showing its hand. There are many parallels to another mystery drama, “Lost,” but while “Jericho’s” mystery is engrossing, it is much less polarizing as there is much more for the show to explore than “What’s going on?” and it is much more accessible to the casual viewer so you can jump right in without being too lost.

As the show enters the last few episodes of the season, an interesting sub-plot involving a potential war with an envious and troubled nearby town has sprung to the forefront.

What makes a show like “Jericho” work is that it nimbly works in action, mystery, and melodrama with an interesting study of the basic elements of human society. That’s a lot to offer, plus Skeet punches a lot of people. The biggest worry with shows like this is if they keep it interesting for more than one season, but there seems to be a lot of potential in this little Kansas town so my hopes are high.