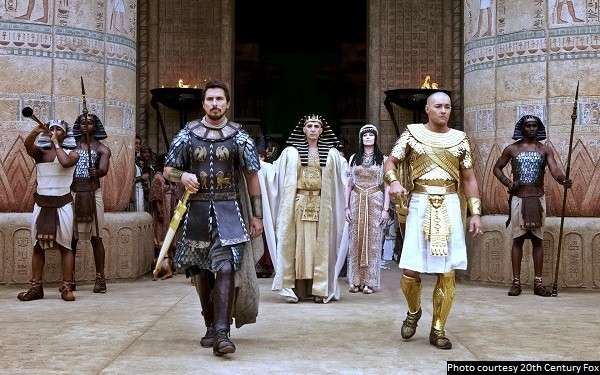 When making a biblical epic, you are really only asking for trouble. But then when your biblical epic is a remake of one of the most seminal films in motion picture history then you’ve found the definition of a no-win situation.

Ridley Scott only barely manages to pull this off by playing the spectacle card with “Exodus: Gods and Kings.” When it comes to the story of Moses leading the Israelites out of bondage in Egypt, it’s hard to get past the image of beard-y Chuck Heston parting the Red Sea and clubbing damn, dirty apes with the Ten Commandments (OK fine, that last part only happens in my crossover fan fiction).

Christian Bale is more than up to the task of playing Moses, especially in the warrior-poet mode “Exodus” casts him in. The rest of the cast is passable, with Joel Edgerton doing his best Yul Brynner impersonation as Ramses and John Turturro secretly crushing it as Ramses’ father Seti.

The problem here is with all the pieces in place, this winds up being a surprisingly passionless film.

The splendor of ancient Egypt is brought to you courtesy of George Lucas’ green screen, which makes the movie feel a little too glossy.

Scott also plays with some interesting ideas in regards to Moses’ relationship with God, but he never fully commits one way or the other, which leaves the movie stuck in a squishy middle ground.

Moses goes from non-believer to full-blown profit and yet his motivations are vague at best. Moses argues with God (portrayed as a petulant little boy), but their discussions are more tactical than theological. Moses isn’t filled with awe and wonder in the presence of the Lord but seems to see him as just another pharaoh with a better arsenal.

But then the plagues come and Scott fills up every inch of the screen with the wrath of God. I actually liked how Scott depicts the plagues as God working with what he’s got. Need the Nile to flow with blood? Just have all the crocodiles lose it on anything and everything. Need to part the Red Sea? Summon up a few mega-tornadoes and that will do the trick.

But then you’re back to the problematic nature of mucking around with a story that has wowed and inspired human beings for a handful of millennia. If you boil it all down to digital effects and forget to throw in the heart and soul then the story loses its humanity (and divinity for that matter).

“Exodus: Gods and Kings” is a cool-looking movie, but when it tries to hang its hat on the flimsy relationship between Moses and Ramses as the emotional fulcrum of the movie, it begins to collapse under its own weight.

If you’re going to remake this story then you had better have something interesting to add other than improved special effects and a better job of casting ancient Egyptians — *cough* Edward G. Robinson *cough.*

Scott seems to be making this movie just to make it; and while it is impressive, it’s not enough to unseat Chuck and the gang from the Easter-weekend Old Testament film of choice. Cecil B. DeMille wins again.

“Exodus: Gods and Kings” is rated PG-13 for violence, including battle sequences and intense images.

PrevPreviousMuch too old to feel this damn young: An evening with Garth Brooks
Next‘Inherent Vice’ doesn’t give us much to sink our teeth intoNext

Pay attention to what ‘She Said’