There’s not much to say about “Hamilton” that hasn’t already been said. The musical phenomenon has reached peak cultural saturation to the point that more people can recognize Lin-Manuel Miranda than the guy on the $10 bill.

It’s as well-known as a musical can get without becoming a movie (and no, the recorded performance on Disney+ doesn’t count), and yet it’s easy to forget that at the center of all of the hype is an actual show.

That’s why it’s a joy to get reacquainted (or just plain acquainted if you haven’t seen it yet) with the stage production now showing at the Fox Theatre through May 1.

What struck me the most this time around is the degree to which Act 1 is a masterpiece. Musical theater gets no better than the first hour-plus of this show which is vibrant, thrilling and packed with songs destined to stay stuck in your head for days afterwards.

In case you’ve been living under a rock or slept through U.S. history in high school, “Hamilton” is the story of the life of Founding Father Alexander Hamilton (Pierre Jean Gonzalez) and his political rival/eventual murderer Aaron Burr (Jared Dixon).

There’s even the palate-cleansing, recurring appearance of King George (scene-stealer Neil Haskell) to provide a little comic relief and different takes on the crazy-catchy tune “You’ll Be Back.”

The show tours exceptionally well, as the ever-present true stars of the show are the rapid-fire musical numbers (“Hamilton” has to boast the most words-per-capita of any Broadway show in history), innovative choreography and simple set design.

If you want to criticize anything, you could make the case that Act 2 takes a half-step back as it deals with more serious subject matter and slower pacing, but at that point you’re just splitting hairs.

Don’t throw away your shot to see the best musical of the 21st century and catch it before it hits the road again. 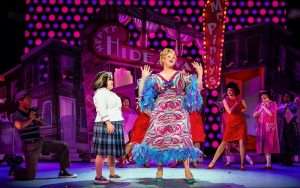 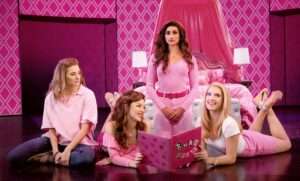 ‘Mean Girls’ the musical is so ‘fetch’